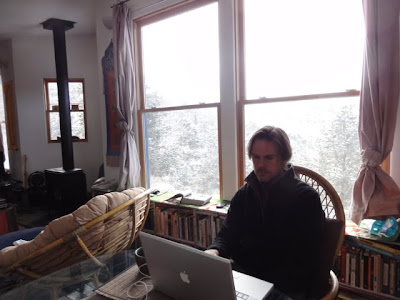 Recently, I applied for the position of poetry editor for the famed Mountain Gazette, a position that, alas, I didn't get. The application called for a creatively written essay stating why you were suited for the position. Here is mine, hyperbole intact...


When I saw the guidelines for applying for the Poetry Editor position, my first reaction was that it is set up in a similar way to the “Cool Things I Have Done” series that continues to play out in the letters section every issue. We Americans, especially those of us in the West sure love our bragging and boasting. How then to approach it the context of a job app?

My first instinct is to follow the example of the samurai from my adopted home of 15 years, yelling out his breeding and heroic exploits to his enemy before galloping headlong to engage them. This approach only goes so far, and is a sure to get an arrow in the chest from those lesser cultured Mongolian hordes.

A more American approach perhaps? Taking a cue from the hip-hip generation and simultaneously dissing my rivals while boasting of the skills of my Samuel Johnson, all done in rhyme? This is a little closer to the spirit of poetry I guess, but isn’t quite me.

Why not step away from poetry entirely for a moment, and simply let the narrative flow, as if told to friends over beers?

Let it start in New Mexico, where I grew up, in a small town south of Albuquerque. We weren’t a mountain town per se, but the mountains weren’t too far off, with the La Drones out west and the Manzanos just to the east. We’d often do the short drive to the latter, though more often it was not so much for the wild we’d find but for the wild we’d create.

The mountains would intersect with writing for the first time in Tucson, where I did a degree in Creative Writing. On weekdays we’d craft the words inspired by our weekend muse of Mt. Lemmon, Sabino Canyon, or those other nameless desert washes lined with crosses marking those who’d been swept away by the flash floods of summer. During my senior year the outdoors trumped the indoors entirely, me being less taken with Dead European males and more with the writing of Lopez and Abbey, McCarthy and McGuane, Kerouac and Snyder.

In fact it was The Beats who informed my next phase, as an aspiring young poet who most found inspiration in actual physical landscapes bearing strong resemblance to those literary ones in which he’d spent so much time getting lost. Long afternoons spent up at Sandia Crest, and later in the Santa Ynez above Santa Barbara, always with a book in a pocket and dreams in my head.

By then, The Beats had really marked the path. Heavily inspired by Snyder and Nanao Sakaki, Japan became the obvious next step. My final American summer was spent in the company of urban poets at Naropa. When not discussing the work of Kerouac, I was talking about the man himself over pizza lunches with Ginsberg, or out searching for his muse in the Flatirons of Boulder.

The next twelve years were spent in the shadow of Mt Daisen, the highest peak in western Japan. It was here that I first encountered “Mountain Gazette,” in the form of “Go Higher.” The words contained within were a pleasant return to Western landscapes vastly different from the low Asian hills that I climbed and skied on weekends. Rural Japan was a pleasant place to live, within biking distance of the beach and a half hour drive to the lifts. The small community there was similarly nourishing. We few foreigners were close and well traveled, the drudgery of our teaching jobs funding frequent trips into Asia. My own boots bear the dust of the Bhutanese Himalaya, the Taoist Peaks of China, the Shamanistic Mountains of Korea; their soles caked with the mud of jungles that stretch from Okinawa to Sri Lanka.

I moved next to an urban setting, at a million-five the biggest I’d ever lived in, yet one still ringed by hills. I moved into a small house ‘in the hills back of Northern-White-Water' ala “Dharma Bums.” This Kyoto was a tough fit, and in hindsight I realize that I spent most of my time in the mountains outside the city. A new partner shared my joy of walking the old roads that connect the villages and temples out there. Over my three years in Kyoto, I figure I walked the majority of the remaining sections of these lines stamped into being by pilgrims, merchants, and samurai. (One road in particular inspired the creation of the first English guide to tramping its western portion: http://tokaishizenhodo.blogspot.com/)

Kyoto is the place that I cut my teeth as a writer. The ramblings of feet and mind were documented in “Notes From the ‘Nog,” (http://notesfromthenog.blogspot.com/), and by the time I left the city in the summer of 2009, I’d begun to make a decent living as a translator and writer whose work appeared frequently in ‘Kansai Time Out,’ ‘Deep Kyoto,’ ‘Hailstones Haiku,’ and most of all in ‘Kyoto Journal’ for whom I’d also served as PR director and am currently a Contributing Editor.

Before leaving Japan, a couple big walks remained. Over 10 weeks, my wife and I walked the entire Kumano Kodo and Shikoku 88 temple pilgrimages, sleeping out on most nights. I watched the passing of winter from Southeast Asia, before returning to my native New Mexico after 20 years away.

I landed in a small Zen center in Santa Fe, finding it the perfect halfway house, blending Japanese and New Mexican culture and design. After being released again into the wild, I found a small casita north of town, living not so much off the grid as beside it. From the window behind my desk, I can see the peaks of the Jemez. Here I continue to shape words, when not selling backpacks at the REI over in town. (A disclaimer: despite working for a big chain [though one with excellent business and environmental practices] I choose to spend my paycheck locally.)

On those walks during my latter years in Japan, I gradually became a student of wild culture, tempered somewhat by the deep-ecology of Snyder (obviously) but more so by the human culture that arises from its mythology, ala Joseph Campbell. It was an obvious next step, what with my being so at home both alone in the wild, as well as in beer and music-fuelled camaraderie. I love it that Mountain Gazette covers both.

As summer moved into autumn, I read nearly every book on New Mexico that the library has, trying to better acquaint myself with my new/old home. I pored over writing that, while interesting, is as dry as the land itself. Which brought the thought: “I need more poetry in my life.” It was exactly then that I saw that you’re looking for an editor of poetry.

You’re up to speed now, and it looks like my round. Over the next beer, I hope to hear your story.

As for mine, references are of course available on request.