Anatomy of a Roadtrip 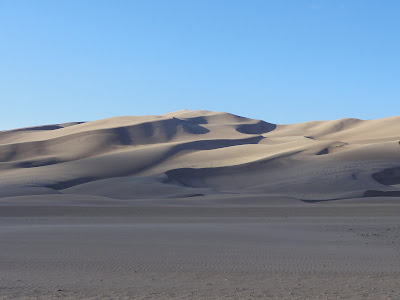 ...we pass a few days in Boulder at my brother's place. My niece is sick, so we rarely leave the house, our time consumed with books and food. On the last day, my brother flies off to NYC for a wedding, and we watch his daughter. Better now, she takes us out into the open space below the foothills, where prairie dogs have built a massive colony. The residents are active in the warmth of the final hour before the sun drops below the hills and the shadows bring the chill. The call of the prairie dog is wonderful to hear, as they stand on their hind legs and raise a banzai to one another. Our presence is what causes this, of course, as they signal across the grass about the approach of the two legs, who laugh at their earnestness. For me, this will be the highlight of the trip, along with the Gary Snyder reading later that night. (I wrote something on that here.)


...southbound, and a quick stop at the consulate again. Despite their promise, they've forgotten to make Sora's visa. Apologetic, they do it in 20 minutes. We are happy of course, but puzzled. Their policy is that this process takes 10 days, and usually requires two trips. Yet they've just proven that it can be done on the spot. Very Japanese, this. Rules over reality.

We move along through wealthy Denver suburbs and out into the prairie, a drive uneventful but for the tall cottonwoods that occasionally rise above the road. We make La Junta by lunch, eaten out before the massive Bent's Fort, standing proudly beside the Arkansas. We spend the next hour wandering in and out of the fort's many rooms, the thick adobe walls holding the chill. I imagine that this would be a fantastic posting for a ranger, living on the spot that was the center of so much western history, and hosted some of its biggest names. It is peaceful here, standing by the fire and looking through at the trees bare for winter. This whole region intrigues. I hope to come back and explore more.

Hills roll us toward Trinidad. It is near dark when we arrive, so we skip the looked-forward-to stroll. We compromise on a meal at an old hotel, but it is a pricey, meat-heavy menu, so I reward myself with a single pint and peanuts and get back on the road quickly. Over Raton Pass into New Mexico again, moving toward home, under the crisp and star-filled sky...

On the turntable: Tedeschi Trucks Band, "Revelator"
On the nighttable: S.C. Gwynn, "Empire of the Summer Moon"