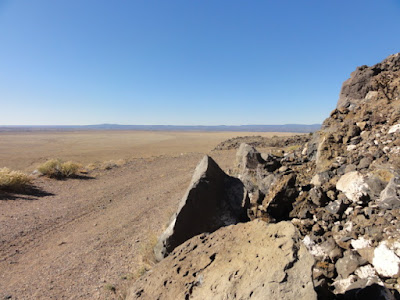 To use the word road was to be charitable. It is amazing to think that it was actually better back in the 1930s, when it was one of the more difficult stretches of Route 66. Comrade Jay was at the wheel, demonstrating remarkable skill in keeping the tires at the crest of the ruts, like a surfer trying to stay atop a large and difficult wave. We eventually left the truck at a place just before the road dropped down the steep black face of La Bajada. Far below to our left was a wide stream winding between banks lined with tall cottonwoods threadbare this late in autumn. Before us, the land fell away, with tall utility towers marching across the desert floor toward the Sandias and Mt Taylor further out in Navajoland. We made our way downward before those black walls speckled yellow with lichen, and other fossilized sea life living on now only as colors. Wide enough for walkers, it was hard to imagine people actually driving this steep narrow road, especially in the early automobiles of the day. Local natives used to wait here for drivers too timid to take on the hill themselves. They'd offer their skills for a small fee, then negotiate the hill in reverse, typically the strongest gear often that time. It didn't take us that long to walk the switchbacks down to the stream. We sat beside an old bridge, attempting to solve all the problems facing American society over the course of lunch. That accomplished, we made our way back the way up to the truck, ascending close to 1000 feet in about 30 minutes.

Not far away stands Tetilla Peak, whose name alludes to the obvious small breast of a shape that stands out at the southern end of the Santa Fe landscape. I'd long admired her curves from my bedroom window, my eyes often draw away while writing in this very blog. We left the truck beside a water tank pockmarked by the blasts of a shotgun, shells scattered amongst our feet. New Mexico's landscape is littered with similar scenes, these inanimate objects being only slightly less intelligent than the person blasting away at them. But with a sense of similar purpose we trudged up the hill just before Tetilla, dropping again somewhat before making our way up the breast itself. There was no trail to speak of, just a placement of feet atop rocks that resembled a hodgepodge arrangement of cobblestones. Walking in time to my rapidly increasing breath, I was thankful both for choice of sturdy boots, and for the fact that the rattlers were now passing the season deep underground in slumber. Just below the peak, the walls of Tetilla become sheer, a solid rock nipple rising erect toward the sun. We sat awhile with the ranges: the Sangres, the Jemez, the Ortiz, the Sandias, purple limbs stretching away in four directions. Filled up, we began moving downward, rushing along a sheer and perilous route, gravity with a hand ever upon our backs. It was quick going over rolling and rocky footholds.

The real adventure was to come. Our usually reliable Sierra Club guidebook mentioned that a longer 20 mile ride out along the mesa took us over a road in far better condition than what we'd come in on. This was somewhat true, until we hit a Y-junction, then another. Before long we weren't sure of our bearings, only that Santa Fe lay out there in front of us. The next challenge was the road, which worsened by the mile. Often, we'd forgo road altogether and cut across the desert awhile. It was beautiful country up there, moving along the low juniper trees growing redder as the sun began to fall. Occasionally Taylor and I got out of the truck to move large stones off the road, though it could hardly be called that by now. Jay made an astute observation that with New Mexico roads, the devil you know is better than the one you don't. At some point I tried the GPS on my phone and was surprised that I had reception. This helped a great deal, and we followed what looked to be the most direct route. Just as the sun dropped from sight, our tires hit tarmac. Out here, we laughed at a small landing strip, laughing that this is the place where Santa Fe gets all her drugs. Relaxed now, we turned on the radio, talked about football. Then we reached the locked gate. There was nothing to do but backtrack. The GPS revealed a road to the left, which we bumped along until...another locked gate. I jumped out of the truck to find another way through. It looked like we might have to sleep out here, and walk back to town to find someone to let us out. Two pickups raced past just the other side of the gate. Frustrated, I jiggled the padlock, and found it open.

We got back to town two hours later than expected, missing entirely the holiday party we'd hope to attend. Jay dropped Taylor and I back at my place, where we talked over tea about the joy of the hikes, and the fun had in unexpected adventure. Then the conversation began to be peppered with words like "If" and "Had We," spinning off completely then into the realm of the hypothetical and its usual permutations.


On the turntable: The Who, "Who's Missing"
On the nighttable: Oliver LaFarge, "The Enemy Gods"