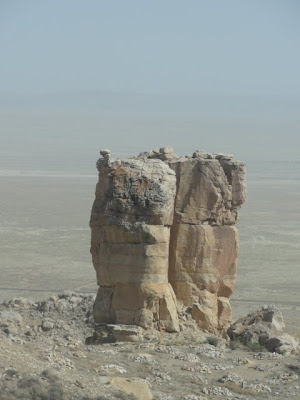 One of the first things we see on the horizon is Agathla, the tall spire that holds up the Navajo sky. The random buttes begin to gather and outside Kayenta, become a crowd of mountains. We stop for gas in town. Near the pumps, a group of bikers is dancing the parking lot. A leather-clad man in a beard swirls his 'Mama' round and round. We follow their Harleys until they turn off into Navajo National Monument. Throughout the day we'll pass more bikes heading in this direction for what appears to be some kind of rally. I'm glad that we hadn't camped there last night.

To our left Black Mesa looms up. It runs parallel to a set of rails that eventually leads to a tall tower with tracks extending from it like the drop of a roller coaster. This is the terminus from which Mr. Peabody's Coal Trains come and take it away. The drive beside the rails is flat, broken only by a few buildings. A Standard Oil gas station is covered with some beautifully drawn graffiti. Red Lake Trading Post stands as it has for over a century, but for one detail. While filming a movie, the crew found some of the walls had been constructed of the wood of old coffee cases, plastered over for fifty years.

We follow this chain of trading posts west and south through the Badlands of the Painted Desert to the Painted Desert itself. The sun is high by now, the colors fading on the palette. The earth turns black near our turnoff toward Wupatki. The former residents here fled during the very volcanic eruption that stained this land. It is here we meet Mike, Holly, and the boys, and wander the ruins through the last of the morning's cool. I'm not as focused on the place's history as much as I am focused on my own. Mike and I were best friends back in college and haven't seen one another in almost four years. A few details do distract me from the conversation. Near the lower ruins, a blowhole thrusts cold wind into the air now growing hot. This natural cooling system is caused by changes in barometric pressure. On colder days, it'll blow hot. I overhear another visitor asking why we don't use such a system as climate control in our own homes. Beside the blowhole, a shamaness is going through a series of prayers, fiddling with beads and stones. Miki and I inch closer, suspecting that she's Japanese. There are another pair of Asian-looking women sitting on a nearby wall, and I walk up and say hello in Japanese. They respond in kind. They both live in Sedona, and are taking the shamaness, from Okinawa, around the West in order to pray at power spots as a form of healing for the recent disasters in Japan. I wonder if I've met the shamaness before, during my own visit to Okinawa's sacred groves nearly a decade ago.

We do the short drive toward the Sunset Crater volcano itself. Near a series of lava flows, we do a short but steep hike up a trail covered over with ash. Where the trail tops out we sit on the trunk of a fallen tree and admire the meadow around us, and the San Francisco Peaks further out. It is gorgeous here, the green of pine standing in strong contrast to the black of soil and rock. It is hard to leave.

We pass through Flagstaff and get on I-40. We only expect to be on it for a few miles. Just before our exit at Walnut Canyon, I look in my rearview mirror to see Mike's car being pushed sideways by a semi. Somehow, he gets the car off the front of the truck, accelerates off the road, and brakes before bottoming out onto the median. I pull off the road and sprint back up the highway to find everyone okay. For such a horrific incident, the damage is mild. I ask Mike how he had the presence of mind to act, well, perfectly. He laughs and says that he doesn't really recall anything about the accident despite it happening mere minutes before. The next couple hours are spent with the formalities of cops and insurance. The trucker is obviously at fault, but I can't help feel sad for him. He squats beside his cab, head in hands. He'll surely pay hell with his bosses.

We change the tire and putter back to town. We are staying at the famous Monte Vista hotel, with its history and ghost. After a quick check in, we grab a beer in the bar in order to decompress. These beers are the first of many, as we grab dinner in yet another pan-Asian joint, then Mike and I will set off alone later. This last drink is superfluous, what I always refer to as going "a beer too far." My head will hate me tomorrow. We stumble back to the Monte Vista. It is graduation weekend for NAU, and this hotel seems the center of the party. I sit in the lobby, much entertained in watching the grads and their families. Later in my room, their noise carries up, but I'm too exhausted and drunk to care, and sleep solidly...

...there's breakfast a short walk away through the quiet of morning. This little renowned cafe is packed, which is a surprise as it has little atmosphere and surprisingly poor food. It takes a lot to mess up coffee and pancakes, but somehow they manage.

Bellies full, Miki and I make our way east. At Canyon Diablo, we pull off the road. This is a destination I've wanted to visit since the early nineties, but I don't recall why. For over two decades, I've been making lists of places I want to visit, but of the places near the top, I rarely remember the reason I wrote them in the first place. Despite this, we slowly roll our Subaru over what can hardly be considered 'road,' taking care not to smack the car's tires into some surprisingly large rocks. My head and shoulders begin to ache from tension and concentration. This place better be worth it. It isn't. We find Canyon Diablo to be a few buildings crumbling back into the desert. Worse is that we can't even approach them: a fence and a set of railroad tracks stand between the ruins and us. Back down the road, we find Two Guns to be a similar story. Here are the remains of a far larger community, but it is on private land and we don't have permission. Without even taking photos, we continue east. It is a relief to be back on blacktop again. This isn't the 'softer' desert of northern New Mexico. Arizona is made of the harder stuff, the type of place in which Hollywood heroes often die.

It isn't long before we arrive in Winslow. Standing on the corner is the shop, "Standing on the Corner." The moment we walk in, what comes over the speakers but that very line from "Take it Easy." I asked the proprietress if she gets sick of the song. She says that it is actually a DVD playing, so there is some variety. How weird that I time my entrance with the very line that willed this shop into existence. Besides the obvious "Eagles" theme, it is filled with Route 66 paraphernalia. Across the street stands the statue of a man, long haired, holding a guitar. Could be Jackson Browne. Further up the road is a monument of real history: The Posada Hotel, long and lean against the tracks.

Just north of here are the Homolovi ruins. They're barely excavated, a mere few walls dug from the earth. The path bisects large holes where pot-hunters made their search. It reminds me a little of bombed-out Laos. Pottery shards litter the earth absolutely everywhere. A team of archaeologists work at the lower ruins near the river. We chat with them but don't stay long. The real attraction here is the desert, stretching broad and colorfully toward the Hopi mesa's up north.

It is that direction we head next. A ranger had told us of some dances at Second Mesa. We drive the long flat road, tracing a course we took four years ago. That day, we hadn't seen anything but a few houses. Now, we see the villages themselves, up on the rocks,well camouflaged and hidden from the desert road. We wind the narrow road up there, park, then ascend the rock and trash filled path up to the village itself. Entering the village square, we're immediately confronted by the sight of dozens of colorful kachina, dancing to the steady beat of drums. They are surrounded by dozens more mudhead kachina, their plain brown faces slightly creepy. There are also a few characters who stand out, tricksters perhaps, with their full, painted bellies, holding watermelons under their arm. In the center two older men sing, giving verbal cues for the dancers to shift. Most of the villagers seem to be in attendance, sitting and standing on the roofs of the houses surrounding the square. As the drums keep up their steady pulse, I note the hands and fingers of the viewers moving in time to the rhythm. Miki and I too are transfixed, barely noticing the hot sun or the wind that keeps swirling dust into our eyes. When the drums cease, the mudheads move to the perimeter, throwing food up to the crowd. I like this idea, of villagers offering food to the ceremony, and then in turn receiving it back, the food truly shared by the whole community. We catch an apple and a couple of loaves of Hopi bread. Treats for the road.

We make one last stop, at Hubbell Trading Post. I walk in its cool shade, the wooden planks creaking beneath my steps. I talk awhile with the Navajo proprietor, buy some tea. Miki and I then walk between the buildings, take photos of the old tools and machinery. It is lovely out here, and quiet, in the shade of the tall cottonwoods nourished by the passing creek. The perpetual flow of the water reminds of journeys not yet finished. We turn and walk to the car.

On the turntable: The Smiths, "The Queen is Dead"
Posted by Edward J. Taylor at 5:36 AM