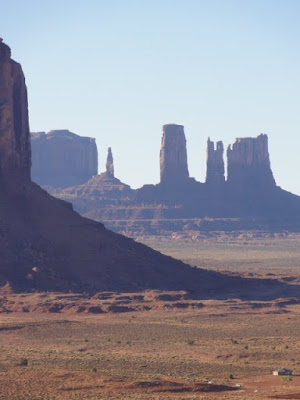 Painted Hand ruin stands at the edge of a cliff, a lone tower set above the fertile valley. I first saw its round, almost European shape in a film back at the Anasazi Heritage Center. This tower served as background artist for what had been for me the most memorable scene in the movie. A Native American father was explaining to his son the importance of these ruins. What struck me was how fidgety, how uncomfortable the boy seemed. His discomfort betrayed that this wasn't some random documentary moment captured on film, but something scripted. The boy was not at ease in being an actor.

We walk toward the ruins themselves, along a smooth trail that is in far better condition than the dirt track we drove upon earlier to reach it. I am impressed by how Miki can scramble down steep rock faces despite the protrusion of a belly swelling eight months into pregnancy. We joke, "Don't tell Seva." Our midwife. The ruins impress in their dignity, and as we often do in these remote forlorn places, we sink into the silence.

Further on up the road is the canyon of Hovenweep, ringed with a half dozen similar towers. It is remarkable how they cling to the cliff's edge, majestic yet destined to eventually fall. Miki continues to impress me with her endurance, as this loop will bring her daily walking mileage up to four. We drop into the canyon, and I place my hand between her shoulder blades with my elbow tucked into my own waist, the strength of my legs propelling us both up the other side. This one hour walk is hot in the midday sun, and we mentally reward ourselves with ice cream.

We find some down in Bluff, at a restaurant/trading post that has the impressive backdrop of tall twin rock spires rising proudly from the clifftop. The ice cream occupies us for the short drive to Sand Island Petroglyph site. We walk the tall red wall right to left, reading as the Asians do. This is a short stop and soon we're back in the car. For us, today's road ends at Monument Valley.

We get to the park around 6, after the Rangers have gone home. We drop down onto the rough unsealed road, our tires banging and bouncing toward the impressive spires we've all seen chewing the scenery behind John Wayne. We've timed it perfectly, the walls of the buttes changing colors with every degree that the sun drops. We stop a few times to shoot pictures. Out at John Ford Point, we meet a group of Japanese men in leather. They're a Harley Motorcycle Club from Hokkaido, riding through the park and living out a dream. As such they're in high spirits, though the most subdued of them admits that they'd overdone it with the drink a little the night before in Vegas.

We make camp on a rise before the famous Mittens. To my surprise, every other camper here is European, even the ones in RVs. One Frenchman tries to park his white behemoth sideways at the extreme edge of the camp ground, blocking the view for everyone. A German goes over to talk to him, and quite expectedly, the Frenchman retreats. Miki and I have a lovely night here with our dinner and the Mittens beneath a moon nearly full. The small piece that detracts is the new hotel built where the old campground used to be. While the architects did a fine of job of making sure it didn't contrast with the scenery, the glare of its lights and the hum of the generators take away some of what the desert was trying to offer us...

...early morning, with the wind so strong that we can no longer sleep. There are no trees or vegetation here, nothing to slow the wind that flaps the cold tent wall against my head. I peek outside to see the eastern sky aglow with the dawn. We climb out of warms bags to watch the sun come up. I break the tent down quickly before it tries to collude with the wind and make an escape.

We have breakfast up at the picnic tables beside the visitor center. There's a low wall here that blocks the wind some, but Miki is chilly and eventually decides to sit awhile in the car. I brave it out here, my eyes triangulating between the view, poems by Gary Snyder, and Robert Casey's wonderful "Journey to the High Southwest."

It's hard to break away, but we do, making a quick stop into Goulding's Trading Post, then leaving the buttes behind as we enter Arizona...
On the turntable: Dead Milkmen, "Big Lizard in my Backyard."