I'm in Santa Fe, training for a month at Upaya Zen Center, and having a fine time, thank you. The hours of meditation, the long work periods, and all the snow are helping to ground me in this land of big skies.
Yesterday, while sitting on my cushion and polishing the mirror, a limerick showed up in my head like a surprise guest:

There once was a person of zen
Who pondered the now and the then.
He sat on his seat,
Losing touch with his feet,
Counting breaths that never seemed to reach ten.


On the turntable: Morcheeba, "Dive Deep"
On the nighttable: Michael Downing, "Shoes Outside the Door"

Posted by Edward J. Taylor at 8:41 PM No comments: 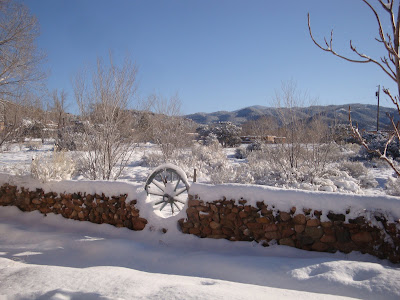 The theme of the three day drive was snow. But unlike the subsequent storms going on back East, this snow behaved itself by staying on the desert and off the roads. On the far-off mountains it looked like punctuation. This enabled us a beautiful ride, free of anxiety. Needless to say, it was a far cry from the tropical weather we'd left two days before, our companion during a two month clockwise circumambulation of Southeast Asia.

The snow began at Tahoe, coating the Sierras as they stretched south to house some of the most spectacular scenery in the country. We overnighted at Lee Vining, beside Mono Lake, in a motel whose roof threatened to calve icicles big enough to pierce the roof of our rented 4x4. Not far from here, beyond a Mammouth enshrouded in ground fog, was Bishop, CA and the western terminus of Route 6. This was Kerouac's famous Road, the ribbon he hitched -- or tried to hitch -- from his home in Lowell, Mass., 3205 miles away.

Out here in Nevada, there wasn't much. Besides Tonopah and Ely, there weren't any other towns, despite what the maps said. These settlements which had promised gas and food on paper were simply a handful of rotting shacks. And they had been empty for some time. The only life were animals scrambling through the white world -- elk, coyote, cattle on a drive of their own. When we eventually spotted Salt Lake City through a break in the hills, it looked like the biggest city in the world.

We braved gusts through a long canyon whose high cliffs were hemmed in with the spirit of indigenous people as vanished as those folks back in Nevada. The snow seemed part of the conspiracy. Colorado thrust up next, with moneyed ski towns showing an ignorance of history, masked as optimism.

Two nights in Boulder, and a parking ticket-tape return. Where Kerouac had been driven by his visions of Cody, I had mine in the form of woodstove pizza and delightfully hoppy IPAs. Southbound next into New Mexico, leaving Route 6 behind. Another trip for another day. Home, a concept poor Ti Jean never fully embraced, awaits.

On the nighttable: Erik Fraser Storlie, "Nothing on my Mind"

Posted by Edward J. Taylor at 8:39 PM No comments:


Everything that came before was Japan...


On the turntable: (Tape rewinding)

Posted by Edward J. Taylor at 4:20 PM No comments: