"[This] is an enormously wealthy and varied nation, yet also an insensitive and cruel and deadening one, and that to strive for recognition or wealth within it is a disquieting, unceasing labor that will not bring the best out of any man or woman. Better perhaps to seek the contentment of more humble work within the belly of the beast, to inhabit the Pascalian room, to chop your wood, haul your water; better perhaps to stay at home and grow your patch of garlic, and dream in winter your subterranean dreams, which are always the same: of light, of warmth, of liberation."


On the turntable: Luna, "Lunafied"
Posted by Edward J. Taylor at 7:48 AM No comments: 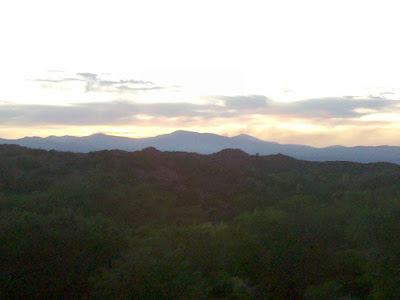 In mid-March, Upaya re-released us into the wild. We settled then, into our new digs in a faux-dobe casita on a hillside just north of town, halfway to Tesuque Pueblo. " Casita" is a Spanish term meaning, "little house," and ours sure fits the bill. A two bedroom, it was open and spacious, but quirky. The shower head came to maybe the level of my chest, the bathtub big and beautiful but the hot water ran out before it could be filled completely. Our joy at our Franklin stove took a header when we found out it was powered by gas. Bizarrely, the stove is electric, and there's no oven at all. Wall and closet space barely exist. Living in Japan is a day to day struggle with compromise, a lifestyle dubbed "creative camping" by one wit. The big house I'd long been envisioning wasn't this. I'd simply moved campsites.

But most of the south wall was all windows, offering major views of the hills and trees beyond. The passive solar worked great, keeping us toasty even through a dozen spring snowstorms. As we moved toward spring, the trees below filled the valley in with color, and as summer comes on, they're exhibiting new fashions yet again. Up on our hilltop, we're surrounded by trees and wildlife. Deer pass by on their daily commute. I'm wary of them at night, as the road out of town allows us to get up to 50mph on the hill. Midway down is a sign warning us of their presence, and one night, a live one stood just below it, watching me pass by. Another night, as I was thinking that a collision with deer is just about the most dangerous animal encounter out here, a bear wandered across the hill above us. Coyotes add an aural presence to the night. My landlady assures me that there are no dangerous snakes at this altitude, but I shuffle my feet when I approach my covered bikes or camp chairs outside. Today I pulled out one of the latter in order to sit with my coffee and watch the thunderheads roll over from the direction of Los Alamos. (The humidity of an encroaching storm is like the hug of grandchild, compared to the anaconda coils of Japan.) I was already moving backside first when I noticed an eight-inch centipede had already commandeered my seat. This bothers me less than the cricket who has been exercising his squatting rights, all night chirp chirp chirping from behind the bricks that support the sink.

It's a pleasure to sit out there on the land, watching the magpies swoop by like a negative image of a Jap Zero, strafing the moles and rabbits hard at work with their landscaping. The sunsets out there at the edge of the hill are magnificent, of the million-dollar variety that this State is renowned for. Clouds, bellylit by the sun, reflect gold over the landscape. Desert grasses glamorize themselves as wheat. That forest fire over in the Jemez has been a recent collaborator, creating a jet trail of black that has evolved into a billowy white plume.

Potlucks are a means of feeding some of us un-moneyed gentry here in town. We had Ouyporn Khuankaew over one night, and on the drive over from Upaya, I pointed out all the multimillion dollar homes in the surrounding hills, most of them empty vacation homes. She was furious, considering how hard she works to get funding for her community. Upaya residents are frequent guests, and it was here that iSaac and I rehearsed for his farewell Zendo gig. With my work schedule Miki and I don't seem to have as many nights alone as we did in Kyoto, so we're watching fewer film. (It's also strange to sit and eat with a film in the weird light of a normal dinner hour and have the credits roll before full dark. Funny how I used to bemoan the short hiking days of a non-daylight savings Japan. Here I turn in about an hour after the sun does.) Nearly all of the films are Japanese classics, as usual, and watching one is like picking at the scab of my homesickness for Japan. Bizarre since New Mexico is my 'actual home.' We'll find a way to reestablish our relationship with Japan; the pre-nup is still a work in progress.

One detriment to living out here is the inevitable return to car culture. We no longer have our short walk to cafes and shopping; nowhere in sight are there any trains or buses. We justified this in a manner of ways: (1) even if we lived in the middle of town, we'd still have to drive in order to visit friends; and (2) this is a good opportunity to try living out in the mountains. This has seen a fundamental change in us. I own my first car at age 42. Miki soloed for the first time about a month ago. Town is a mere half hour away by bike, no different that my old commute, but for the hill and the desert heat. The road isn't that busy, but being desert, people drive too damn fast. There is an element of schadenfreude in the fact that my body and my bike would do about the same amount of damage to a speeding vehicle as a deer.

The night we moved in, we met up with the Upaya gang down the road at Tesuque Market, with its ambiance of an old stage stop and with its miraculous wood-fire pizzas. An hour or so before we'd been cursing the snow, as we lugged nearly 200 boxes (most of them filled with books) up the 39 railroad ties that are a sly wink at Hitchcock. Now, after dark had fallen, the snow-laden trees above truly were that cliched cathedral, emblazoned with white as we made our way toward the beer that is inevitable at the end of a hard day's move.


On the turntable: "Egyptian Noir Nubian Soundtrack"
On the nighttable: Michael Chabon, "The Yiddish Policeman's Union"
Posted by Edward J. Taylor at 5:00 PM No comments:


Over at hers, Miki posted a brief narrative about a bear that came by the other day. In Japanese only, but with some nice pics from around the property.


On the turntable: Neko Case, "The Tigers Have Spoken"
Posted by Edward J. Taylor at 7:18 AM No comments:


"Not to kill emotion, but to turn it towards the Divine, is the right way of the yoga."


On the turntable: "Putumayo Presents Italia"


I am one of those annoying people who is always wearing headphones. Unless I'm in actual conversation with someone, I am rarely far from my music, which over three decades, has led to an amount only measurable by copious.
I am also one of those people who, when on a bike, don't ride so much as race. Under the iPod, I feel like I'm gliding in slow-motion over the city to my own personal soundtrack.
A side affect of this whole phenomenon is the St. Vitus dance I do while in public, limbs and phalanges atwitch. It takes all the willpower I have not to jump up and down in the vegetable aisle, tracing the shapes of the produce with my bobbing head.

On the turntable: The Kinks, "Face to Face"
On the nighttable: Andy Courturier, "A Different Kind of Luxury"
Posted by Edward J. Taylor at 8:54 AM No comments:


"Mortality comes with the sad wisdom of age, when the sense of curiosity has withered."

On the turntable: Philip Glass, "Orion"

Posted by Edward J. Taylor at 8:46 AM No comments:


"If you are really ready to take up the Earth's burden, take it up by all means -- but do not let us hear your groans and curses, do not frighten us with your sufferings. The man who really takes up the burden blesses the world. It is the savior who should go on his way rejoicing -- not the saved."


On the turntable: "Manchester - So Much to Answer For"
Posted by Edward J. Taylor at 8:39 AM 1 comment: